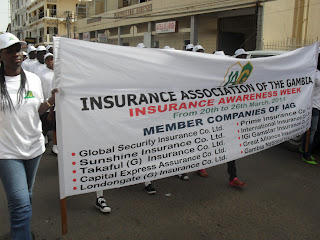 The Insurance Association of the Gambia (IAG) today, Monday, starts its annual weeklong sensitization campaign that seeks to further increase the general public’s understanding of insurance and insurance policies in order to lay foundation for building a trusting relationship between insurance providers and the public.
It’s the second edition of the Insurance Awareness Week which is part of IAG’s information, education and clarification programme that seeks to increase awareness of the public about the progress and benefits of The Gambia insurance industry.

Mr Henry Jawo, executive secretary of the IAG, said the insurance awareness week focuses attention on creating improved public relations and offers the general public the opportunity to be part of its educational activities from dynamic lectures and presentations on various issues about insurance in the country.

The aim of the insurance awareness week, which seeks to draw attention to the noble profession of insurance, is to contribute in providing better understanding of basic insurance by the public, improving the public image of the industry, and developing public interest on insurance so as to pave way for a more insurance responsive public.

According to Saihou Samba, coordinator of the IAG, the campaign will serve as a platform for the general public to engage insurance practitioners in a consultative forum to clear any misconceptions about insurance or insurance policies.

The IAG will also use the opportunity to showcase its membership to the insuring public hence promoting member companies.

The weeklong programme will today start with a sponsored walk starting at the branch of the International Insurance Company at Kairaba Avenue, going through Westfield to Serrekunda and ending at the head office of the Gambia National Insurance Company on Kairaba Avenue, where statements will be delivered by various insurance technocrats and other distinguished guests.

On Tuesday the IAG will launch its website, which will take place at their secretariat in Banjul.   The website allows information dissemination to a wider audience both in and out of the country about the IAG and the Gambia insurance industry in general. On Wednesday, the association will organize a lecture on the theme: “The role of the Gambia insurance industry in the Programme for Accelerated Growth and Employment (PAGE) to be held at the Atlantic Hotel in Banjul.

Thursday will be the annual general meeting of the association in which members will discuss the achievements and challenges over the previous year and chat a new way forward.  On Friday, the association will organize a football match to be held at Manjai field.  On Saturday, the last day of the weeklong event, is the annual dinner of the association.
Posted by Gambia News Online at Monday, February 20, 2012