Operators of boats plying Banjul-Barra crossing points have irrationally increased the fare by 40 per cent, from D15 to D25, as many people have resorted to crossing by boat due to frequent failing and deteriorating ferry-services.

In the same vein, the people who carry passengers in and out of the boats have also increased the cost of carrying each passenger from D5 to D10.

Passengers who use the boats often complain of the frequent increase in the cost of crossing but have no viable alternative other than using the service.

People have to bear the brunt of this situation whilst the ferry continues to spend hours in the river and sometimes experiences problems and breakdowns in the river for hours without reaching the other bank of the river.

“Fare increment is one; the other thing is that since operators know that people must cross by boat to run they businesses normally, the boat owners or operators do not even care about the welfare and comfort of passengers – not even good words to passengers,” Ousman Dampha told MarketPlace shortly after crossing to Banjul from Barra.

Words like “if you cannot cope with what we are doing you are free to get out of the boat; we are not forcing anyone to come on the boat”, are common for the boat operators to say to passengers.

This reporter, who was at the boat crossing point on Sunday, also observed that people are usually parked in the boat like firewood, with little or no spacing in between. 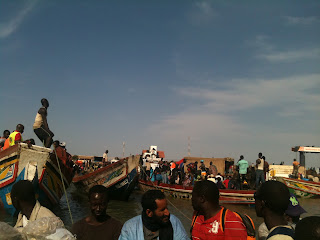 About 150 to 170 people are packed in a boat of about ten metres in length and three metres in width.
In such a situation most of the people do not even have life-jacket to protect themselves in case of accident, which is not uncommon at that point.

Sometimes, only few passengers would have life-jackets, which are most times very old, leaving one in doubt of their soundness in keeping someone afloat in the river, in case of accident.

A boat captain justified the fare increment saying operating a boat “is very expensive”, particularly now that the pump price of fuel has increased.

A litre of fuel has, however, been increased by D1 recently.

Muhammed Ndure, a law student at the University of The Gambia, said: “I was very afraid when crossing due to the poor condition and the way the boat is managed.

“To me, the boat is managed by some care-free crew with less concern about the welfare and safety of the passengers.”

Ndure, who spoke to MarketPlace at the Banjul crossing point, said the boats are very old, expressing doubts whether they are given proper maintenance.

Asked why under such a situation he was still using the boats to cross, he said: “I cross by boat because it takes ages – at least three hours or more - to cross by ferry or sometimes there is no ferry at all.”

A boat passenger, Fabakary Jobe, has told MarketPlace that as long as passenger boats do not have licences indicating the number of people they should carry, they would continue to over-load them.
For him, such a regulation will also help with the issue of the life-jackets as it should be mandatory that all boat operators have the required number of life-jackets their boats are licensed to carry.

Again, there should be regulation that people who are underage, such as under 18, should not be working on the boat because it is considered child labour, whilst the small boys are also involved in the business have no respect for elders.

Passengers are now beginning to wonder about the purpose and usefulness of the security guards, the fire service and other security apparatus, at the boat crossing points, since all the above-mentioned anomalies take place in their presence.

“You cannot tell me what to do, I know my work here,” an officer shouted at a passenger who was insisting the over-loaded boat depart to Barra.

The passenger was also complaining to the officer that most of the people did not have life-jackets, and it was evening with high tide at sea.

Many passengers are accusing the guards at the crossing points of leaving the boat operators to over-load their boats because they receive some tips from the operators at the end of the day’s business.

The officers are accused of not protecting the lives and property of the people for which they are paid.
Instead they defend the boat owners against any concerned passenger who would dare to complain about the odd happening at the ferry crossing points.

It is believed by many that, because of bribery and inducement, relationship between the state security personnel and boat owners at the Banjul-Barra crossing points is very cordial.