Rush for ‘cheap’ Kanilai bread: A visible sign of poverty 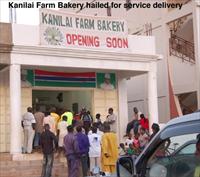 It’s not a surprised that people, most of whom are low income earners living below the poverty line of $1.25 per day; continue to form very longqueues to buy bread from Kanilai Farm Bakery, owned by President Jammeh, at a reduced price of D3 per loaf.

There are some people whose special daily routine for this Ramadan is just to buy bread from the Kanilai Farm.  When they wake up their only work is to go and join the excessive long queue to buy the bread; sometimes spend hours waiting for their turn.

The original price of bread, as of now, is D5 but due to President Jammeh’s reported generosity and love for Gambian reduced the price of bread his bakery to D3 hence people storm there for D2 difference on each bread.

Even when it is only D1 difference people will still make long queues.  Gambians are now use to cheap things - whether it’s of good quality or not, is another thing.  However, this does not mean that Kanilai Farm’s bread is of low quality.  The point here is that due to rising prices of basic goods, falling value of the Gambian Dalasi and stagnant earning power of Gambian workers particularly those in the civil service, people are always going for cheap things that can do similar work as the quality one with high price.   In a nutshell, average Gambians buy what they can afford not necessarily what is of high quality.

Many Gambians are eating today just to satisfy their hunger not because a particular food is rich is balance diet.  No wonder why child malnutrition is on the rise, as some 11 per cent of children under the age of 5 are malnourished in rural areas of the country, presenting a 1 per cent increase over the previous year, and highest recorded record since 2006.

How can you have more than 50% of the population living in poverty, struggling to meet their three squares meals a day not to be going for the cheapest price?

JollofNews has reported that President Jammeh has vowed to go the extra mile in order to shoulder responsibilities and support efforts aimed at alleviating the suffering of Gambians confronted with serious food shortages and dangerously inflated prices of basic commodities.  One of such efforts can be giving bread free of charge to people, not only to alleviate the suffering of low income earners who are struggling to keep their head above water but also because we are in the Ramadan during which people’s reward from the side of Allah are double. And also it will be part of Jammeh “going to the extra mile” to alleviate the suffering of the people.

Yes, I understood that he has given out many bags of rice and sugar, but it will not be bad to give bread as well which can be financed from part of the profits been generated from the operations of the company over the years.  Besides, this should not be anything big to him as he used to throw biscuits to people that are more expensive than each loaf of bread even at the original price of D5 per bread.

Again this should not be a problem to somebody who often dishes out money from half a million to millions of Dalasi of his personal money to musicians, and footballers.

Well, I am not an Oustass, but I believed that he will be rewarded more or almost similar to the reward he was given by God for sponsoring the Quranic recitation competition, when he gives free breads.

The other issue is how can the president’s owned business be able to reduce price by a margin of D2 on each loaf and still be able to make profit even if marginal or better still able to recover cost and bakeries, who are equally Muslim and hence should be Allah fearing, are not able to do so.  Did the president have unfair competitive advantage over them because it is not clear whether his numerous businesses pay tax as his competitors do.  This is still an issue of great concern which is yet to be cleared either by the presidency or by the revenue collecting authority.  If the president’s businesses don’t pay tax, then he has unfair competitive advantage over his competitors who are required to pay 15% sales tax on each loaf of bread sold.
Posted by Gambia News Online at Thursday, August 02, 2012